Update: I have been reading lot more than I anticipated. To keep the blog clean and focused, I will add future book reviews here and not as individual posts. 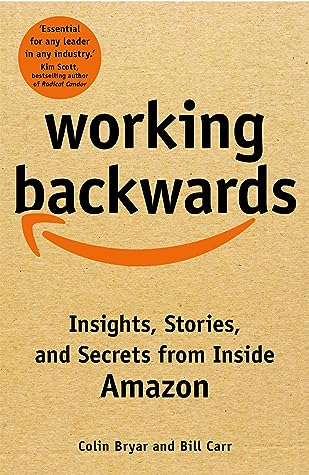 This book is written by Bill and Colin, who joined Amazon during late 1990s just after Amazon started, and have seen the transformation of the company from a retail business selling music CDs and books to the behemoth that Amazon is today.

The book is divided into two parts. The first part talks about the key principles of Amazon Leadership, several key processes at Amazon and links them to the success of the company in the market. The second part discusses the stories of how Kindle, Prime and AWS came to life and links them back to the principles and processes in the first part.

It is very easy to say we care about the customer experience, but at Amazon, it is "Customer Obsession", one of the original leadership principles, and every key success of Amazon can be linked back to this single principle. Jeff was very obsessed about the customer's experience. Working Backwards from customer experience and solving the problems is a novel way of thinking about things - maybe much more apparent now but back in the day no one thought like this.

By enabling product teams to move independently by introducing "the mandate", they could move faster and experiment. Experiments fail, but the point is that innovation is the by-product of successful experiments. This enabled single-threaded leadership.

Many startups innovate before going public but once they have the money, the company slows down. Not Amazon. The compensation structure of everyone at Amazon was tied to the long-term vision of the company rather than the short term goals. No bonuses, no big salary, just a competitive salary plus stocks of Amazon.

Amazon may have competitors but it is so diverse that it may outlast every single company out there. It does business in retail, entertainment and developer platform and no single company in the world can compete with it in all of the verticals.

With all other things being equal, the organization that moves faster will innovate more, simply because it will be able to conduct a higher number of experiments per unit of time.

A good rule of thumb to see if a team has sufficient autonomy is deployment—can the team build and roll out their changes without coupling, coordination, and approvals from other teams? If the answer is no, then one solution is to carve out a small piece of functionality that can be autonomous and repeat.

Be stubborn on the vision but flexible on the details

We shouldn’t be afraid of taking on hard problems if solving them would unlock substantial value.

The idea that Amazon, a pure e-commerce distributor of retail products made by others, would become a hardware company and make and sell its own reader device was controversial.

Most businesses don’t have the tools to evaluate the cost of not doing something. And when the cost is high, they only realize when it’s too late to change.